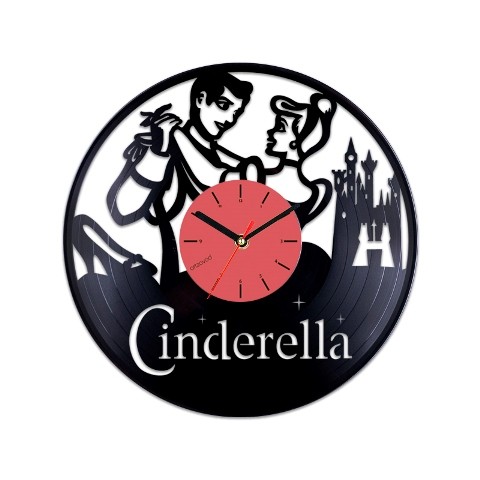 Дата создания: 2016-09-26 Просмотры: 3956
Series of the Disney wall clock contains a lot of different vinyl clock models. The Princess series is one of the most interesting and special one. It represents scenes and characters from such remarkable Disney cartoons as Little Mermaid, Beauty And the Beast, Cinderella, Snow White and others. Such clocks will be a great gift idea for children. You have an opportunity to choose the best clock among a variety of Disney princess clocks.
Alice in Wonderland is considered as one of the most influential books in the world, thereby, we cannot leave this magnificent story without proper attention. In addition to Disney wall clock series, our design team made two variants of Alice in Wonderland clocks. Disney clocks gained big fame and now we are glad to present you our new Alice in Wonderland clock, made with a great craftsmanship and diligence on vinyl records.
Each of models illustrates Alice surrounded by other characters from the book. This vinyl clock made in a classic Disney clock style and perfectly reflects the atmosphere of cartoon. Every detail of the clock “Alice in Wonderland” is carved neatly and accurate as a result of which the whole composition remains beautiful and harmonic.


Romantic and tender, Snow White cartoon and its characters served as an imagination for our design team. The Snow White vinyl record clock will be a bright and special detail for any type of interior design due to its universality and laconic styling. You can see a lot of neatly carved details on this the Snow White vinyl clock and also a classic inscription, which perfectly complements the clock.

You should also pay your attention to the Cinderella clock. It is represented in two beautiful models, each of which is complemented with a title inscription, as well as the previous clock models. Both models contains a lot o pretty detail, such as a little pumpkin on the clock face or a cute shoe, which was lost by Cinderella at midnight. Cinderella vinyl clocks are completely though-out and greatly composed as you can observe.

The story about clever and appealing Disney princess Belle became an inspiration for us, thereby, we created three varied models, each of which depicts a particular scene from the cartoon. Two of three clocks from the “Beauty and the Beast” vinyl record clock models illustrate, directly, the main characters of the cartoon, including Cogsworth clock in the typical Disney manner. The composition is decorated by the name of the film in the lower part of the clock. Each of these two models has its own shape peculiarities, so you can choose the best one to your liking. The third Beauty and the Beast clock from that series is slightly different from two previous. The given model is more laconic and reticent, it depicts only silhouettes of the cartoon’s characters.


As in the case with other Disney record clock series, we were laboring a lot, trying to make a noticeable and high-profile interior detail. We created four Little Mermaid vinyl clock design, each of which will become a highlight of your apartment due to its thought-out styling. We were trying to make our Ariel clock convenient for all tastes, so you can choose exactly that vinyl record clock, which will be suitable for you in all respects. Pick out the next two Disney vinyl clock models that depicts dreamy Ariel with her best friends – Sebastian, the crab and Flounder, the fish. That type of clock is very detailed and graceful. Or, maybe you will prefer more laconic second model, with Ariel in the center of the composition, surrounded by shells, seaweed and corals. In conclusion, you can pay attention to the last type of the Ariel clock, which depicts Little Mermaid on the sunset background above the clock and King Triton below.