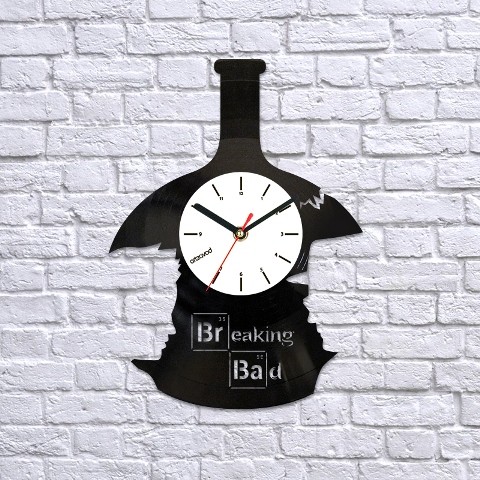 Created Date: 2016-04-26 Hits: 1889
We can move to another era, another country and even a reality with help of movies. Each story we see on screen affects us in one way or another. Together with the characters we laugh, we cry, grieve and rejoice. Together with them we can find ourselves in a fictional world and do amazing things. Legendary movies and characters inspired us to create vinyl clocks. Most of them are made based on the fiction movies with superheroes, time travel, and magical countries.

Superheroes
Sometimes we want to be a superhero or at least to have some superpowers. What kind of power would you chose? How would you look? While you imagine, look at these superheroes with their stories and characteristics.
Batman does not have superhuman abilities, but has a high level of intelligence and excellent physical preparation. We recognize him by suit the manner of a bat. There are three vinyl clocks with Batman image in our collection.
Iron man is another genius billionaire. Love to technology and intellectual abilities helped him to create a protective suit.
Superman is a famous superhero, is kryptonian. He has incredible strength, speed, hearing, eyesight, able to fly. Superman is depicted in his famous raincoat on the vinyl clock.


Harry Potter
Harry Potter is one of the most famous wizards. This is a story about good and evil, about love, about magic. Developing designs of vinyl clocks, we mentally went to the School of Witchcraft and Wizardry Hogwarts. We would go for a walk through the mysterious and convoluted corridors, to make the magic potion and fly over the surrounding areas of the school. We still need to work over the potion but we will try to give you a little of magic. The amazing Hogwarts and his student Harry Potter are depicted on the vinyl clocks.


We liked to travel to fictional places and we decided to travel in time.  Imagine you have a time machine. Where would you go? The heroes of the famous film Back to the future made us think about it.
You will meet other characters on the vinyl clocks collection: James Bond, The Godfather, characters of the fantasy trilogy The Lord of the Rings. We could not pass by such popular television series as The X-files and Breaking Bad and made vinyl clocks with them.
Each film is a special story that can change our world perception, answer some questions, and discover interesting aspects of world.